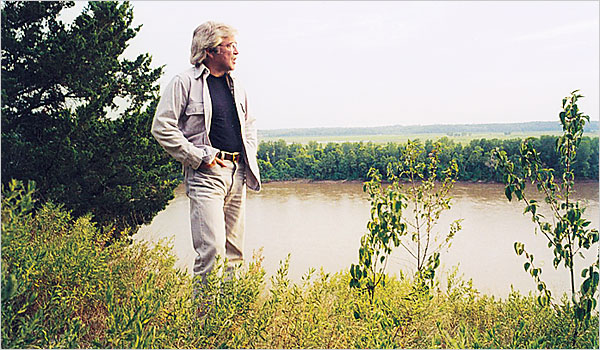 Blue Highways is the story of author William Least Heat Moon’s journey through the United States in a van in the early 1980’s. He sets out after a breaking up with his wife and losing his job to take to “the open road in search of places where change did not mean ruin and where time and men and deeds connected.”  The title Blue Highways refers to the old, secondary roads that cross rural America, and by the end he had covered almost 13,000 miles of them. It is the ultimate road trip book.

There are so many things I loved about Blue Highways. I loved the author’s dry sense of humor and the kind and openminded way he approached the traveling, the destinations and the people he encountered. But my favorite part of the book was the way that Least Heat Moon masterfully and beautifully wove environmental and historical knowledge into the narrative. . .

Fifty miles away rose the ancient volcano like those that puffed out the first atmosphere, and under me lay the volcanic basalt ridge the old river had cut through. For thousands of years, chinook and chum and bluebacks swam upriver to regenerate, and Indians followed after the salmon; and then new people came down the river after everything. South lay the Oregon Trail under four lanes of concrete marked off by the yellow running lights of the transports; south, too, were glinting rails of the Union Pacific.

I’ll admit that it wasn’t a page turner for me, but in the end I’m so glad it took me awhile to read it. I was able to slowly meander through the United States and savor the journey and the destinations alongside the author.