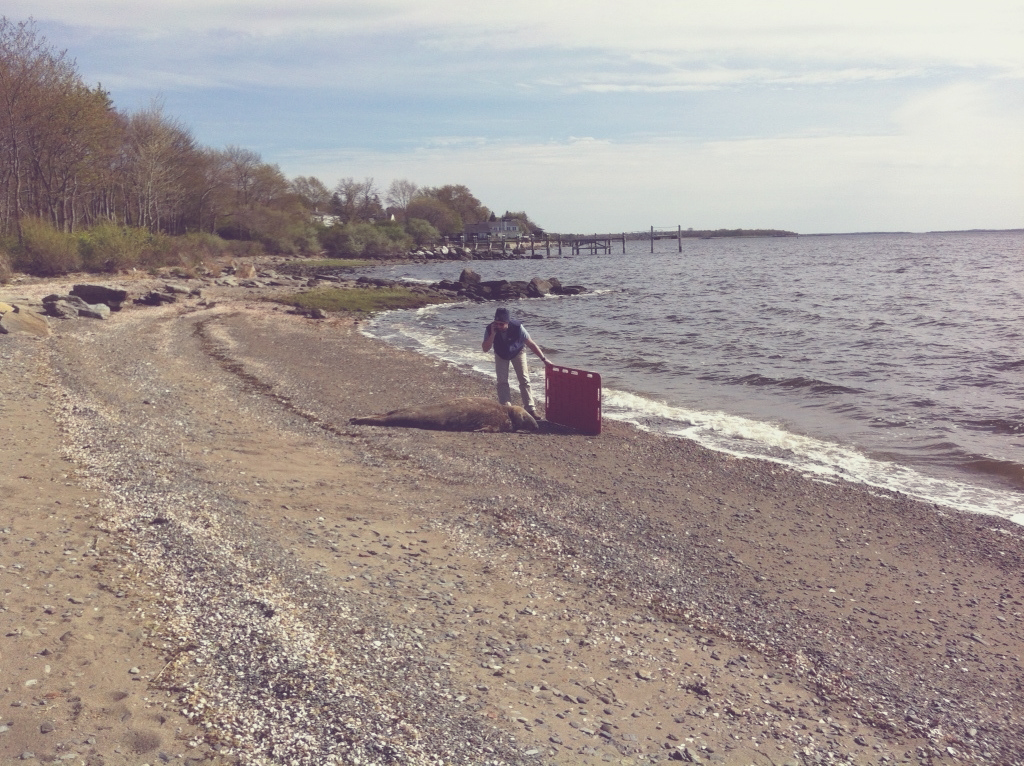 When I was younger, I would constantly scan the ocean, bays, and estuarine rivers of Rhode Island looking for dolphins. If I was feeling particularly sullen and angsty that day (most likely over a boy) I would sit on the shore and wish with all my might to see a dorsal fin or a tail flip.  It wasn’t until I made my first trip to out to California however, that I actually saw marine mammals in the wild.   Despite how it may seem sometimes, whales, dolphins, seals, and sea turtles are all around us here in New England. This is something you learn pretty quickly if you volunteer to become a first responder in the Mystic Aquarium’s Marine Mammal and Sea Turtle Stranding Program.

I got my first call since receiving my training this winter, and it was a pretty exciting one! A large, subadult Gray Seal, was spotted pretty far up Narragansett Bay. Most of the time, it’s not such a big deal for seals to be hauled out on a beach, but there was something about this case that prompted Mystic Aquarium to take the two-hour drive to Rhode Island to attempt to collect it. Unfortunately, the box they brought was too small (even though it was the largest they had!), and the seal was a bit too feisty and swam away. The seal was on the beach again the next day and a crew of volunteers, including myself, monitored him or her all day, trying to answer any questions the public had and making sure no one got too close. When I went back to check this morning, the beach was empty. It’s possible the seal was just resting, but there is a great network of volunteers up and down and coast and if he/she hauls out again in a worse condition, it’s very likely that someone will spot it.

If you’d like learn more about seals in New England, might I suggest a Save the Bay Sealwatch tour?